Last Tuesday Sandra Doyle, Chris O’Brien and myself attended Quota’s Student of the Year with our own Bob Antill being one of the judges of the competition. It was a difficult task as all students performed brilliantly and it was sad in one way that there had to be a winner.

On Sunday we had our Christmas in July fundraiser which raised a fantastic $1405.00 to start our Club’s fundraising for my 1000km walk next April.

Donna and I were delighted to have so many at our home and by all accounts the food went down a treat.

I was asked by a few to post my recipe for the turkey stuffing.

I will try but I really don’t have a recipe as I just go with the basics and then add what I feel like is right for that day.

I can’t give you quantities as I simply don’t measure anything!

Tip – When you make breadcrumbs you can always freeze what you don’t use. I usua 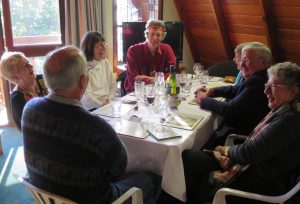 lly make too much and by freezing the leftovers there is no there is no need to throw away what hasn’t been used. I will make breadcrumbs when we have a loaf of bread that is going stale, putting them in the freezer for later use.

I hope that helps those who asked.

A number liked the ham sauce which was only Dijon mustard and maple syrup. Again the recipe I started with had far too much Dijon, so I had to keep adding maple syrup to make it a little less hot. (Not everyone is like me who likes hot English mustard on his ham). The great thing about this sauce there is no cooking.

Have a great week and I look forward to our Assembly this Thursday and hopefully you will have matters you want discussed or issues you are not happy with.

Want to know more about Rotary?

Please click HERE to view – download the ‘Rotary On The Move’ Newsletter for August 2016. There is a great article from the Woden Daybreak Club about attracting and keeping new members.

To learn a little about one Rotarian’s efforts to end Polio click here.

27 Members and guests descended on Michael and Donna’s place on Sunday 31 July for a Christmas in July fundraising event. The weather was great and the food, wine and company outstanding. For main course we were treated to some expertly cooked ham and turkey with roast potatoes and pumpkin – we even had Brussel sprouts, some even put their hand up for seconds. Unfortunately, Therese and I had to leave before the plum putting was rolled out, however, I understand it scored a 10 out of 10.

This Thursday we are back at the Whale for a club assembly and board meeting. If members have items to raise at the assembly, please let Michael know well before the meeting.

Don’t forget Chris has organised an interesting speaker for 11 August. Annette Kennewell from the South Coast Health and Sustainability Alliance (SHASA), a not-for-profit group based in Eurobodalla who help to make renewable energy more accessible and more affordable. SHASA is coordinating a solar bulk buy for the Eurobodalla community. Please encourage friends and guests to come along to the meeting.

A little old man shuffled slowly into an ice cream parlour and pulled himself slowly, painfully, up onto a stool… After catching his breath, he ordered a banana split. The waitress asked kindly, ‘Crushed nuts?’ ‘No,’ he replied, ‘Arthritis.’

This collection of 20 newspaper headlines will have you giggling at the English language – and perhaps at the lost art of copyediting.

A Puzzle or two to Solve

Jennifer and Jose live in different sections of their town but go to the same school. Jennifer left for school ten minutes before Jose and they met in the park. When they met, who was closer to school?