Hello, Rod’s Ramble comes from the Nation’s capital today. I am in Canberra for a week working. Hopefully Laurelle will be in the chair for this week’s meeting. Welcome back Laurelle, look forward to hearing about you travels soon. I understand Angie is also back tonight, welcome home Angie.

Over the weekend I attended my high school 50th year reunion along with our own Peter Bull and friend John Brown. Yes, we went to the same high school Sydney Boys High and finished year 12 in the same year 1968. It was great to catch up with friends not seen for 50 years and not recognised thank heavens for name badges. Lots of tall stories were told and teachers bagged. I also found out that Peter Bull started his career as a larrikin 50+ years ago.

As I said at the meeting we are still searching for a President for 2018-19. The AGM is only 6 weeks away and the President Elect should be in place before then. Why – so that the incoming President can have some influence over who is on their Board. Not sure what happens if we don’t get someone, probably means our 60th year is our last year.

At this week’s meeting the recently formed membership committee is going to lead a discussion on their deliberations to date. I what to encourage everyone to participate.

Have a great week.

I just wanted  to thank you for all of your support and help with the Expo last Saturday.  I suspect that without you we would not have had such a success with 10 exhibitors plus the Tesla – and then approx. 250 through the door.  While the numbers do not match those that you have had for the past two years – I was extremely pleased and consider the Expo a success.

I have had positive feedback from some of the exhibitors and believe that most if not all will participate next year in Narooma.

Thanks to the Narooma Club for allowing us to run the Expo in Moruya this years and if there is anything that we can do to assist the Narooma Club next year then please let me know.  Thanks again

As I write this I am laid low with a cold so Rod’s Ravings may be a better title.

Last week’s meeting had a great vibe due to the unexpected attendance of three Rotarians and two partners from Victoria and our regular visitor Rotarian Gordon. “Older” members tell me that visiting Rotarians was a regular feature of meetings in the past as Canberra Rotarians came to Narooma for holidays. I am thinking of writing to all the Canberra clubs reminding them we are here and encouraging them to visit. What do you think?

Wednesday October 24th is World Polio Day. Here is a link to more information on this event. https://www.endpolio.org/world-polio-day

A couple of weeks ago Luke Burgess the Maintenance Manager at Dalmeny IRT emailed me to ask if Rotary was interested in some old wheelchairs, walkers and other equipment no longer suitable for use at the Care Centre. I emailed Fred Fawke to see if he and RAWCS were interested, well at least I thought I did! I was actually using an incorrect email address. When I realised my mistake, I made contact with Fred on Friday afternoon. Believe it or not Fred was on his way to Moruya with a three-tonne truck to pick up some hospital beds, so on Saturday he was able to continue on to Dalmeny to pick up all the gear. We managed to load a heap of old wheel chairs, walkers, walking sticks and other bits of pieces onto the truck before the rain struck. I understand that the gear will be sent to Sierra Leone.

Thanks to Fred Fawke and Brain Goldstraw (Gungahlin Rotary) who picked up the gear and to Luke Burgess and the IRT who made a very generous donation to help Rotary International projects.

I also made a quick trip Moruya Rotary’s Renewable Energy Expo on Saturday afternoon. Although the number of exhibitors and visitors were less than what we had experienced when our Club held the event at the Leisure Centre it was great to see the Moruya Club take up this important initiative. Thanks to Frank for all his enthusiasm for the event and to Phil Armstrong and his team from Moruya for taking the event on this year.  Hopefully, we can bring the Expo back to Narooma in 2019 with Moruya taking it up again in 2020.

Members are reminded to advise me by 4:30pm on the Tuesday prior to the meeting if they are an apology for our Thursday meeting. If you are bringing a guest, please also let me know by 4:30 each Tuesday. Preferred format for letting me know is email. 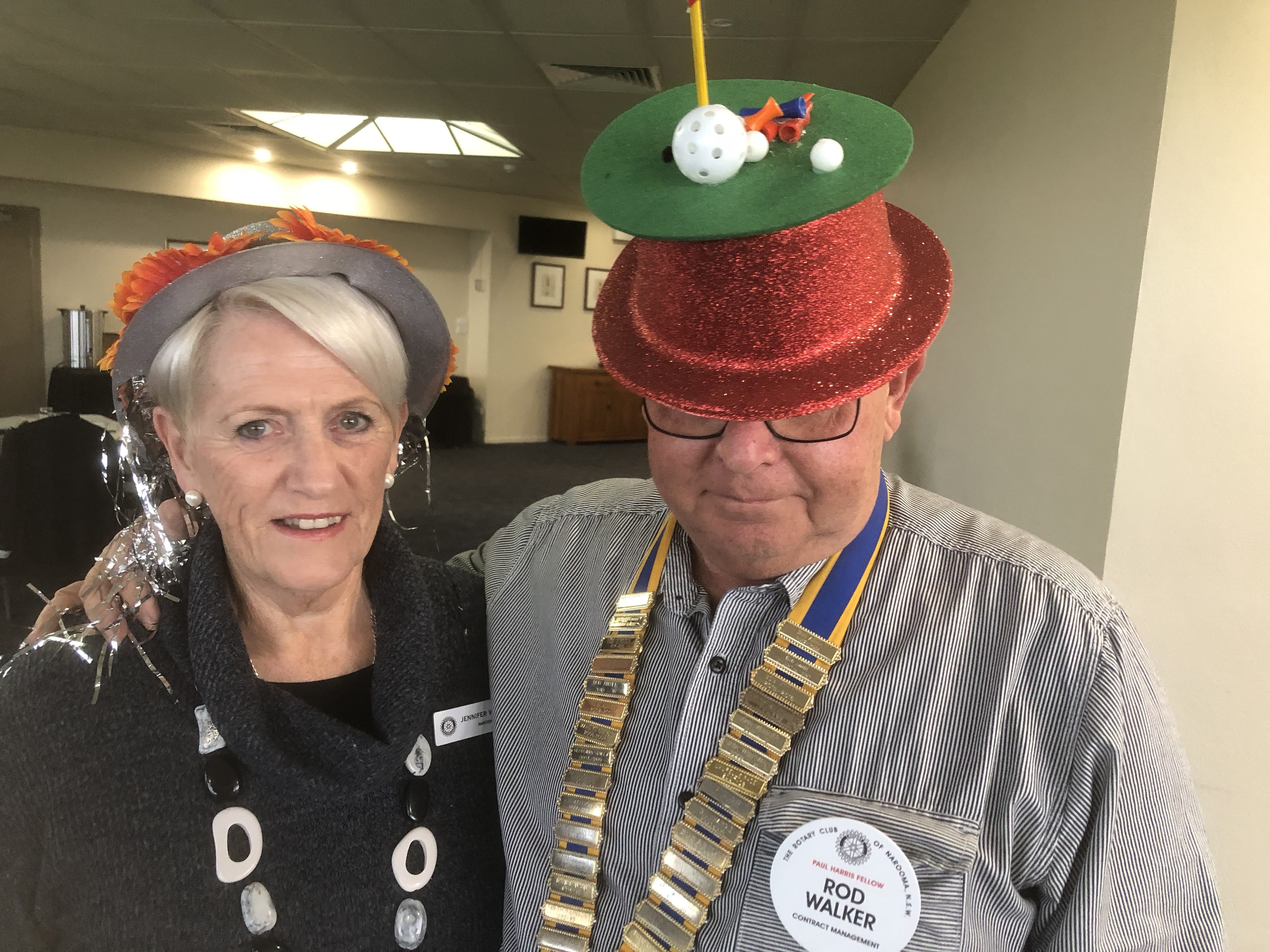 I take my hat off to last week’s meeting where members recognised the scourge of mental illness in our society and highlighted Rotary’s efforts to combat this insidious disease. Like Australians often do we reflected on the impact mental illness has on families by doing something funny. A funny hats theme was the order of the day. Thanks to all who participated and to our guest judge Therese (is that how you spell it Bob?) Aston.

Keeping with the theme guest Dr John Brown gave a brief but insightful presentation on how mental illness can manifest itself. It was a pleasure to have John and wife Larry with us at Rotary. We have some great speakers coming up before the end of the year.

Title: Your Health and Retirement Nancy Casu is a fitness specialist, personal trainer, author, speaker and presenter on the subject of ageing and functional fitness. She earned her degree in Health Science (Leisure & Health) at Charles Sturt University and has fitness specialist qualifications.
Nancy believes we should live our lives to the fullest, live with no regrets and keep a positive attitude.

25th October Michelle Preston and Donna Falconer
Turning Family Pain into Power
Donna and I take the message of drug awareness very seriously and use our combined lived experiences to educate people on how to deal with an addict, keep mentally healthy through the process and offer many families a confidential space to simply off load without judgement. We also
have a vast network of local service providers that we can link people with.

Captain Charles Swanston Writ Large: revelations from a nineteenth century bank archive’
After a lengthy career as journalist and writer, in retirement Eleanor resumed her study of Australian history. She was awarded a doctorate from the University of Tasmania in 2017. Based on her thesis, the biography SWANSTON Merchant Statesman was launched by Professor Henry
Reynolds in Hobart in August 2018.

22nd November Noel Trevaskis (PDG)
‘The Rotary Story; Yours and Mine’

3-Minute talk – Chris O’Brien on all things hats, followed by a hat quiz.

Last week’s meeting was an Assembly and followed a Board Meeting. At the Board meeting the following dates were confirmed:

It was also decided that the proceeds from this year’s Duck Race will go to our Tertiary Scholarship fund.

I can’t stress enough how important it is to the future of the Club for members to take on Board positions.  Please consider doing something in 2019-20. In particular we need a President Elect for 2019-20 to maintain some continuity. This position is available now we don’t have to wait for the
AGM it is a current year vacancy. Talk to me if you are interested.

Our next community activity will be our Market on the 28th October combined with our volunteering expo. We need all hands-on deck for this day. Please let John Doyle know your availability ASAP. In particular we need someone to tow the van on that day. If no one is available we may have to forego cooking at this market and again in November. We will also need people on the Rotary stand.

Next on our community agenda will be Carols by Candlelight on Friday 14th December commencing at 7.30pm. We will most likely be doing a sausage sizzle. Then its 2019 and we start the year with the Duck Race on Saturday 26th January. If you already know you are NOT available can you let Charmaine as soon as you can.

Membership was discussed the Assembly with a number of suggestions on attracting members tabled. Including the use of social media and holding a free event with food to capture interest from the broader community.
The Assembly agreed to set up a small committee to develop some other strategies. Chris, Frank, Lyn and Ange are on the committee but I am sure they would welcome anyone willing to help.

At the next meeting we will be celebrating Hat Day and all attending are asked to wear their best or worst hat. Special guest will be Dr John Brown.
With 1 in 5 people experiencing a mental illness every year, it’s very possible that you know someone who has had a tough time with their mental health. It’s now Mental Health Month and World Mental Health Day is 1 WEEK AWAY. That’s when Australian Rotary Health will be celebrating
Hat Day.

Rotary Club in the Philippines

Not much to report. I have moved the Board meeting to this Thursday 4th at 5:00pm as I will be away again the following week. That will make this week’s meeting a Club Assembly. Under consideration will be dates for the AGM I would ask that everyone start to consider what they will be able to contribute to the running of the Club next Rotary Year.

We will also set a date for our Christmas party and discuss the venue. If anyone has a view on the venue please let me know before Thursday. At the Board Meeting we will also consider a request from Wendy Machin. Does anyone know Wendy or the background of this request?

‘I am writing to you in the hope that you will support me in an application to the local Dalmeny Sporting Club. I am seeking some of their funds to pay for a pathway from the bus stop on ort Avenue to the top of Ruth Place; parallel to the Dalmeny Bowling Club. I work with IRT and manage our residents who live independently on the outskirts of the care centre’.

DG Wendy who is a member of the Rotary Club of Brisbane High Rise, has represented Australia and Queensland internationally and was the Queensland Government’s Economic Development Portfolio Director during the 2000 Olympic Games.

Wendy was General Manager of Boys Town Counselling Services with responsibilities across Australia.

14 Members were present last week along with 2 Club guests and 3 guests of members.