A very small square this week, as I will be away from this weekend and missing the next few meetings due to firefighting training.

By the time this comes out, the winner of the Whale Raffle should be known. Many thanks to Norm of Narooma Charters for his generous support to our Club and Shelterbox.

We welcomed back Lyn and Rolf from their visits home to Seattle and Switzerland respectively. Next Thursday, after the suggestion from the Club member who comes up with these things, Peter B, they will regale you with the highlights of their visits.

This will be followed I hope by a lively discussion on our proposed new Constitution and By Laws as these documents are central to the functioning of our club. Please let Frank know during the week and before the meeting what changes etc., you think should be made to our present Constitution and Rules ( hopefully will be renamed By-Laws).

Our fun night, thanks to the generosity of Charmaine will be at her home on the 15th September and she and Bob have been given a few ideas to make it “fun”.

Finally, can members please contribute to the Beacon as Peter would love to have your contributions. – Pres. Michael 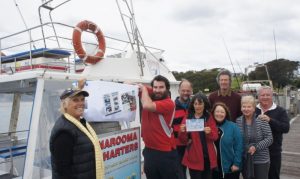 As the plight of those who have been displaced from their homes unfolds on the nightly news, Government agencies and NGO (Non Government Organisations) rally with personnel to assist.

Watching we often think about how we can help, but helping can be as simple as buying a raffle ticket.

On Saturday the 3rd of September, just after noon at Narooma Town Wharf, Nick Ingersole of Narooma Charters plunged his hand into a large box of tickets stubs and drew out the winner of the Rotary Narooma Whale Watching Raffle.

The money raised by Rotary Narooma will go toward ShelterBox and shelter kit Australia Disaster Relief.

“Rotary Narooma is a proud supporter of ShelterBox. We raise money to donate to this cause because it is tangible, we can see a positive result for the money donated. Each year we conduct the Whale Watching raffle in August and our Duck race on Australia Day for ShelterBox. “ President of Narooma Rotary Michael O’Connor said.

President Michael added “When we purchase a ShelterBox ($1,000 ea) we get a number and can track when it has been deployed anywhere in the World. Transparency for where the money we raise is spent is very important to Rotarians and the community of Narooma we serve”.

Thank you to all who bought a ticket in the raffle, you are winners who have played a small part in helping people in Australia and the World when a disaster strikes.

Congratulations Mandy Wheatley and Narooma Charters for your support.

3-Minute Talk: Mike Young spoke of the Rotary Club of Broome’s Dragon Boat Race. This annual event is a series of boat races by inexperienced paddlers against many obstacles, such as crocodiles and a killer 8.5 metre tide! As this event cannot be fully described in 3-minutes, Mike took 20-minutes!

Club Assembly: As Chris & Laurelle were away, the Club Assembly was quickly over with full consensus on all matters raised!

Happy Moments: Were dominated by the return home of Rolf from Switzerland & Lynn from Seattle.

This Week’s Puzzle: Club members Rod Walker & Peter Bull  celebrate 50 years association with Rotary this month. Both were Foundation Members of the Interact Club of Sydney Boys High School 1966. The following photo contains both members. Can you identify them by sending an email correctly indicating where in the photo they are.