What a meeting we had this week. Georgia Poyner, a 15 year old Narooma High School student, kept us spell bound for about an hour on her free diving, scuba diving, photography, triathlons, spearfishing, drawing and much more . Her pictures of the sharks, in particular, brought back memories of scuba diving at South West Rocks among the sharks and so I can well understand her love of what she sees metres below in our oceans. Just listening and seeing all that she did in the last 12 months was amazing and to top it off she is helping to research our marine environment as a volunteer.

As I write Sandra Doyle is in Canberra at the Model United Nations Assembly (MUNA) with students from Narooma High School – Paris Blessington, Lilly Burgess, Shaina Woodard and Cyann Vlatovic. They are representing the Phillipines and we know they will gain a great deal from the experience.

Last night (Friday) Donna & I attended the Quota Trivia night at the Narooma Club in support of So Art. Laurelle was also there but I did not see any other Rotarians, but, as I am woeful at Trivia, I was not looking too hard. However one piece of Rotary news was that we have two applicants for Rotary Youth Program of Enrichment. More work for Sandra who is doing a sterling job with our Youth program.

Today (Saturday), thanks to the efforts of Frank and Iris this morning, we sold all our Whale tickets.

While I hate selling tickets, it really is a good public relations exercise as you get a good chance to engage with the public and let them know what Rotarians are trying to do in and outside their community.

You might note I have not used an acronym . I sent an email today to Sandra with a misspelling of an acronym but, unlike Peter’s and Bob’s excuse last Thursday, it was not deliberate to catch out whether she actually noticed the mistake. I have an admission to make. I had to look up what the acronym for Rotary Youth Program of Enrichment actually meant to make sure I had it right.

For me at least it means I am definitely Outside the Square as all these acronyms baffle and annoy me. 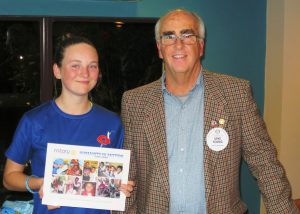 As President Michael has mentioned above, our guest speaker was Georgia Poyner. What an outstanding young person she is – enthusiastic, engaging, confident and obviously a dedicated hard worker. This year 10 student is an accomplished artist and photographer, swimmer, triathlete, scuba diver, angler, researcher and teenager, who, in her spare time, sits submerged in cold briny water at night to count rare tropical fish for university researchers. This activity involves the citizen scientist organisation, REDMAP, an initiative of the University of Tasmania & the Australian Government. Georgia was recently awarded a significant grant from the Aim for the Stars – The Layne Beachly Foundation to do work experience in Tasmania with IMAS (Institute for Marine & Antarctic Studies). As a result of this study she has been invited to go with an expedition to Macquarie Island, Antarctica. Georgia’s art & photography as been acknowledged with several top 20 finishes in the annual Moran Photo prize. (sorry Michael for the acronyms) 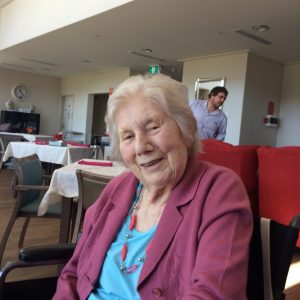 As Rotary is her only family in Narooma, any members who can drop into Estia, Dalmeny to wish her well would be great.

Joke of the week:

Returning a little early from an interstate trip to see his team play at the MCG, a bloke sees the car of his wife’s boss in the driveway. Suspecting an affair, he asks the cabby if he would be a witness. The cabby agrees, in return for $100. Together, they go through the back door, creep up the stairs, and into the bedroom. And … sure enough. Switching on the lights, the bloke yanks the blanket back and there they are, naked! The husband puts a gun to the naked man’s head.

Shaking his head from side-to-side, the husband lowers the gun. He looks over at the cabby and says, “What would you do?” The cabby replies, “I’d cover him with that blanket before he catches a cold.”