The Rotary week began with Donna and I attending the Lions Youth of the Year at the Narooma Golf Club. It was a great night and well adjudicated with our very own Charmaine White The chief adjudicator. Alicia Bate, a fellowr firie with John at Dalmeny was the winner.

I have been told that Narooma Lions will be holding the Statewide Lions Youth of the Year in March 2017. I will be on the Bibbulmun Track by then but it would be great if we could fill a table at the event. 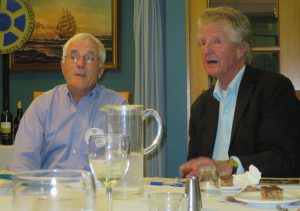 On Thursday we had a interesting meeting and talk on the Christine Noble Foundation by Terry Cassels. Interesting for me was that she was living on the streets of Dublin around the same time that I was handing out soup to the homeless all around the city on a Saturday night.

I informed Allan Spencer, head honcho of the National Busking Championship that we agreed to host the Championship on the 27 May 2017. He was delighted with our response.

After the wonderful Wooden Boats afloat event I went to the Lions markets to say hello. They were packing up when I arrived but by all accounts they had a successful market.

Finally, remember the dinner meeting on the 24th November is at our place 153 Old Highway. 6.00pm for 6.30pm Latecomers and their friends will be accepted but they will miss out on the meals on wheels cuisine but there will be other food and drinks.

Next week’s meeting will be a Club Asembly at President Michael’s place. Michael has already emailed members the agenda items. The fare will be from Meals on Wheels – should be fun.

and of course don’t forget the Renewable Expo, the Committee have don a wonderful job putting it together, I reckon it will put Narooma on the map as Renewable Town. If you haven’t yet done so check out the Pelican Digital video at:

Drone Flyover of Narooma from Tim at Pelican Digital

The Editor is back(well almost)

Yes folks the Editor is back – well almost. I am currently finalising this edition of the Beacon in our hotel room in Hong Kong, iPads and the Internet make the impossible possible. Therese and I will be back home on Tuesday. Thank you to Peter Bull and Frank for keeping the Beacon rolling whilst I was away. I enjoyed keeping up with Club events through the weekly newsletter. It seems that the Club has a busy time ahead with the Renewable Expo at the end of the month as well as planning for the National Busking Competition next May.

Therese and I have had the trip of a lifetime. The three months away have gone in a blink of an eye. We have experienced the full range of temperatures from more than 40 degrees in Dallas to minus 7 or 8 in Helsinki as well as some varied and interesting cultures. There were many, many highlights for us along the way; two however, stand out. One being able to spend some time with our daughter, Clare, for a couple of days in England and for over a week in the Italian city of Bergamo where she is studying for the year. She delighted in showing us how she was mastering Italian language and culture. The second was spending a week in Northern Ireland with  Jonathan Coulter and his family. Jonathan was a Rotary EXchange student who stayed with us for a time in 1997 when Therese and I lived in Nyngan. Jonathan still believes that the year that he spent in Australia was one of the best and the exchange program helped him greatly to set his future goals.  Jonathan has a doctorate (as does his wife) and now plays a significant role in prostrate cancer treatment research at Queens University, Belfast. Another example of the value of Rotary in our society.