I have spent the last 10 days babysitting four granddogs and their house in Carwoola. The highlight was when it snowed one morning.

Thanks Laurelle for chairing the last meeting and congratulations again to Charmaine for her continuing efforts in Timor Leste. Her work not only reflects well on her but on Rotary also. It is our only International project and we are very grateful for her efforts.

As we are in our 60th year I thought I would share the occasional Rotary historical anecdote. In 1958-59, the year we were chartered, there were 9,878 Rotary Clubs in the world and 464,245 Rotarians. The Rotary Foundation totalled $US624,711. Six new countries were represented – Ghana, Guyana, Jamaica, Madagascar, Nepal, and Rwanda. The R.I. President was Clifford A Randall from Milwaukee. His theme was ‘Help Shape the Future’.

Our guest speaker this week is Michelle Garcia, a music teacher at Narooma Primary School. Her presentation entitled ‘Music for the Primary Student’ will explain her new music program for students Kindergarten to Year 6. She will whizz through singing, rhythms and instruments leading us into the After School Music Program; you will meet the after school teachers, learn what they do and be entertained. We have a number of Rotarians away so please bring as many friends as you can.

It was another interesting meeting last week.

Charmaine White spoke about her recent two weeks with the dental project in Timor Leste, her eighth ‘tour of duty’ on an aid project. It was a joint RAWCS, Lions and Carmelite nuns’ project.Charmaine has considerable admiration for the people of Timor Leste who she says “earned their independence”. She is impressed that everyone works – men, women and kids. Since independence they have greatly improved literacy. She said under the Portuguese, only 5% of the population was literate. Under the Indonesians,10%. Now it’s about 65%.

She also spoke about the ‘missing’ generation because of the wars; there’s a lot of younger people and older people, but not many in between. Unfortunately few of the younger generation respect the knowledge of their Elders about their land. Power was off eight times during her two weeks there, so they had to resort to their trusty back-up generator. She mentioned a solar panel project at the Carmelite orphanage that no longer worked because rats had eaten through the wires. Charmaine has followed it up on her return and has contacted the Australian supplier who will try to have it fixed by their local agent and the wires encased in conduit to hopefully prevent the problem recurring.

Also last week, membership was discussed at the Club Assembly and how to possibly reach newcomers to the area, perhaps in conjunction with other clubs and organisations.

Moruya Rotary’s plans for hosting the 2018 Renewable Energy Expo are well advanced. It will be held on Saturday 20 October in St Mary’s school hall.

New Moruya President Hack Ward thinks they might; he has proposed that their Club trial fortnightly meetings with the hope of attracting younger members. He contacted three clubs who had made that change and received generally favourable views. All Moruya Rotarians will be given the opportunity to vote for or against the trial. Their meeting this week will hold a short forum to discuss the issue and then all members will be emailed asking them to vote. If 75% of those replying are in favour of the change, it will be trialled for a six month period from January 2019. 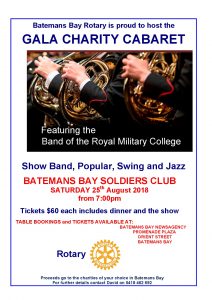