Another successful market …. huge Market, Easter Sunday. Thank you to all who helped make this a possibility. To David and Rachael and Laurelle who organised the gate, to Michael and Frank for marking out and working in the van, John and Sandra, John, Peter, Bob Aston, Frank’s visitor Peter, Lynda and Ashley, Lynn, Merinda, Gordon Bentley from Dubbo, John Rungen, Charmaine, and to those who worked cleaning the van last weekend. Many hands make light work and the wonderful turn out today really eased the load.

During last week I attended the funeral for Ron Constable. Ron was not only a long established part of the community but also a fellow Rotarian from our Club. Our thoughts go out to his wife Joan and their children.

Last Thursday evening we had no official guest speaker but a wonderful fellowship and a lot of laughs. Frank’s friend Peter also filled in a spot telling us about his walking trips in Australia.

Now Easter is almost behind us I look forward to the grass slowing and a chance to catch up with things.

Take care and see you on Thursday evening,

Well done everyone who helped out. 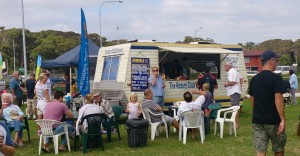 Last weeks “unofficial” speaker was Peter Kasper, who hails from Austria.  Peter spent some time at ANU studying renewable energy and megawatt storage for levelling fluctuations in the electricity grid.  He now works for Pantec, an automation company based in Switzerland.  (Think about very large machines with lots of moving parts that need to move together to produce a result – eg 30 metre long weaving machines).  In his spare time he is building an electric car and playing his clarinet in the Sinfonische Blasorchester Vorarlberg

On a previous visit to Australia, Peter did the walk from Orbost to Mallacoota, through the Croajingolong National Park, a very difficult walk of 100km taking 10 days or so.  Being out of mobile phone reception, carrying all of your own water and food, and no beer ! – certainly a test of stamina and endurance that changes the way you feel about the word around you.

Peter is staying with Frank and Iris at Clark Bay Farm, and has been making himself useful as a “wwoofer”.  OK, well we have allowed him to see some touristy stuff as well, here he is pictured below at Potato Point, trying to work out the engineering that went into the building of the wharf – does anyone know how long it is since it last functioned? Surely a good topic for a short talk at a future meeting?

The Art of Pen Making

John Doyle told us a little about the art of making pens.  The stock part can be purchased via the internet.  The fun part is making the barrel which can be made of acrylic or wood.  This is mounted in a small lathe, and turned down with very sharp chisels.

Coating the wood with super glue gives it a hard shiny appearance and preserves it forever.

The other end of the pen can be used to swipe on your phone.  Note to self – remember to use the correct end of my new pen !!!!

The speaker on Thursday is Victoria Callioni who is the President of the Friends of the Eurobodalla Botanic Gardens.